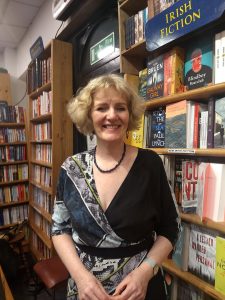 Moya Cannon was born and grew up in Co. Donegal. The dramatic mountains and coasts of her native county inspired her early poetry. After studying history and politics at University College, Dublin, she helped to set up a Gaelscoil in Dublin before undertaking a graduate degree in International Relations at Corpus Christi College, Cambridge. Her preoccupation with poetry overtook her interest in history and she settled to a teaching career which would leave time for writing.

Galway was home for almost thirty years and many poems reflect the experiences of the West – its exposed mountains, the Gaelic culture of the islands, the quiet places of Clare. Traditional music has been a central focus and she has often given readings with musicians and singers, among them the harper Kathleen Loughnane, the traditional singers Maıghréad and Tríona Ní Dhomhnaıll and the RTE Con Tempo String Quartet.

After publication of her second book, Moya was elected to Aosdána, which allowed her to give up full-time teaching. She has been editor of Poetry Ireland Review and, as Heimbold Professor of Irish Studies, she taught creative writing in Villanova University in 2011. For many years she co-directed a summer course in creative writing in the National University of Ireland, Galway. Dublin is now her home.

In her poems, history, archaeology, pre-historic art, geology and music figure as gateways to deeper understanding of our mysterious relationship with the natural world and with our past. Migration is a central theme, the migrations of people, of birds and of culture. A recurring preoccupation is the web of connections between us, the land and sea of our endangered planet and the vast variety of lifeforms which the earth sustains.

In 1990, Moya’s first book (Oar, Salmon Press, Galway) won the Brendan Behan Award for the best first collection of poetry published in Ireland in the previous year. It was subsequently republished by Poolbeg Press and Gallery Press. She has since published five further collections. In 2001 she received the O’Shaughnessy Award from the University of St. Thomas, St. Paul, Minnesota. Her 2011 collection, Hands, was shortlisted for the Irish Times Poetry Prize. Her Collected Poems was published by Carcanet Press in February, 2021.