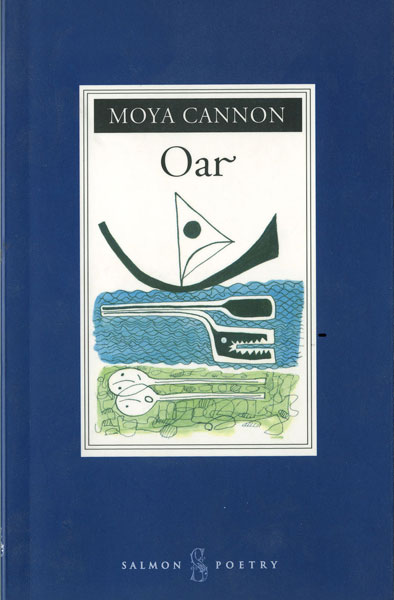 The unexpected tide,
the great wave,
uncontained, breasts the rock,
overwhelms the heart, in spring or winter.
Surfacing from a fading language,
the word comes when needed.
A dark sound surges and ebbs,
its accuracy steadying the heart.
Certain kernels of sound
reverberate like seasoned timber,
unmuted truths of a people’s winters,
stirrings of a thousand different springs.
There are small unassailable words
that diminish Caesars;
territories of the voice
that intimate across death and generation
how a secret was imparted —
that first articulation,
when a vowel was caught
between a strong and a tender consonant,
when someone, in anguish,
made a new and mortal sound
that lived until now,
a testimony
to waves succumbed to
and survived.

"Its sterling qualities are manifest and manifold: a deep interiority and soaring lyricism, and an ability to produce what Tim Robinson has termed ‘geophany’, a showing forth of the earth."

"All the journeyings envisaged and chronicled by Moya Cannon are to be sought in a remarkable symbiosis of humanity and the “natural world”, a perceived and felt unity of creation which goes light years beyond any mere empathy of imagining. The Burren and Connemara and the Donegal Coast lend themselves too readily to “artistic” exploration. In these poems they are long imprinted on the poet’s eye, and of the very weave and texture of her craft. I should not be surprised if a few of Moya Cannon’s phrases become, in time, part of our ‘poetry-talking’: “the faulted hills”, “the room-sized fields”, “the clay part of the heart.”"

"Complicated things happen simply in these poems. The Burren’s dove-saints hatch out under the eyes of raptors; old wooden sailboats of Connemara take root in salt water. Moya Cannon’s style is a discreet as the advance of spring over her favoured landscapes… It is good to have a collection of her work to hand, for deep rereading."